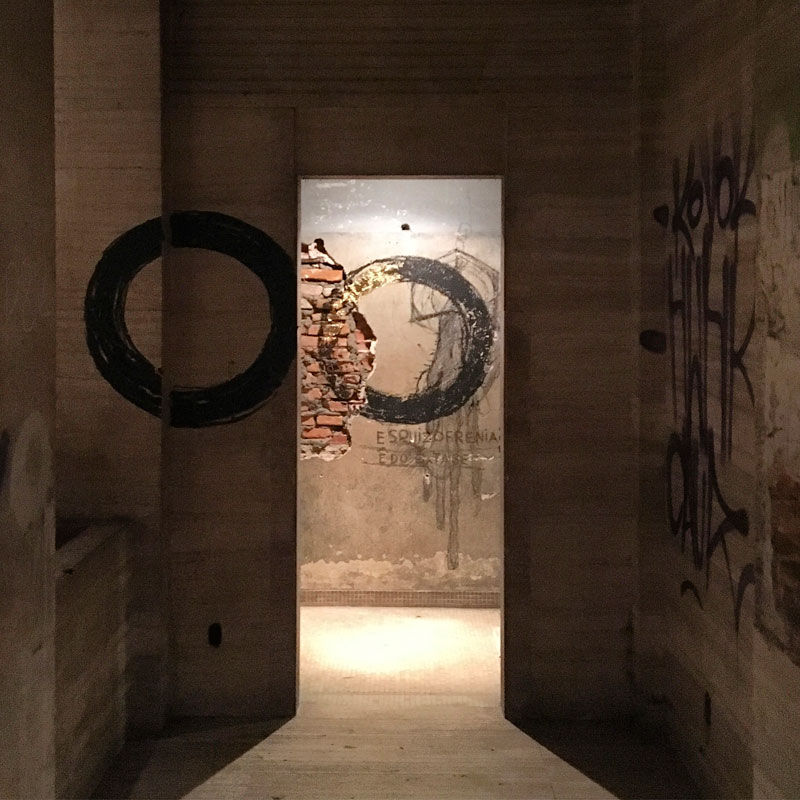 Esquizofrenia da forma e do êxtase [Schizophrenia of Form and Ecstasy] comes from three Nelson Felix actions. The first, with displacements to two places in America: Anchorage, in Alaska, and Ushuaia, in Argentina. These points would be like ‘the beginning and the end’ of the ridges formed by the Rocky Mountains, in North America, and the Andes, in South America, seen poetically by the artist as the backbone of the globe.

For the second action, in the building that houses the Ocupação 9 de Julho [Nove de Julho Avenue Occupation], downtown São Paulo, the artist worked on the external and internal space of Galeria Reocupa, to be inaugurated on October 16. The latter, as part of the 33 rd Bienal de São Paulo, brings a series of seven sculptures to the Bienal Pavilion.

Exhibition at the Reocupa Gallery

New works carried out by Nelson Felix on the external and internal areas of the Ocupação 9 de Julho’s building will be available for visitation at the recently opened Galeria Reocupa as another step in the process of Schizophrenia of Form and Ecstasy. According to Nelson, “the amalgamation of this series of actions was carried out through drawing, from the constant act of drawing. From this exaggeration of articulated elements rises a notion of ‘landscape’, a notion of space that merges natural space, poetic operations and constructed space. It is filled up with perceptions, meanings, history, feelings, desires, memories. It requires an effort from the observer. The work demands time for you to grope and begin to see its structure.”

In this act, which lasts 24 hours and covers the spring equinox – which in 2018 occured on September 22 at 10:54 p.m. –, Nelson Felix installs a sculpture composed of iron, steel cable and two seven meters high mandacarus [Brazilian cactus from the Northeast] in the gables of the Ocupação 9 de Julho’s building. After installing these pieces, the artist portrays the scene in drawings made in situ, as do the still-life painters.

During the opening of the exhibition at Galeria Reocupa, Nelson Felix had an open conversation with the public. For the artist, the perception of space is characterized by a tangle of issues that encompass poetry and drawing. In this sense, it uses sculptures, objects, photographs, actions, geographic coordinates and displacements to construct an idea of space that extrapolates the immediate place of the installed work, reaching a global scale.